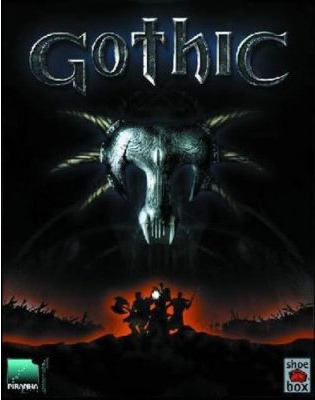 Gothic - the first game in the Gothic series developed by Piranha Bytes, and tells the story about Nameless Hero and his adventures, who, as it would later turn out, has been chosen by the god of light and justice – Innos.

The plot of the game tells the story of the Nameless Hero in the penal colony, known as the Valley of Mines. It is situated on the isle of Khorinis, and is surrounded by a magical barrier that transmits everything from the outside world, but is a deadly obstacle for every living being trying to penetrate it from the inside. This magical barrier was created on the orders of king Rhobar II by magicians to protect the extraction of magical ore from the mines. The king Rhobar II needed a lot of it to produce weapons for his army, and the mine was supposed to provide it.

The king Rhobar II defeated almost all enemies of his kingdom. The orcs were an exception. They never sinned with cunning or intelligence, but they had a powerful advantage in the form of enormous strength and determination in the war against human kind. The story begins when the main character goes to the Valley of Mines as another, seemingly ordinary, convict. Before he is cast behind the magical barrier, he receives a letter from the Fire Mage, with the task of delivering it to the High Magician of Fire in the Old Camp, one of the three main organizations in the game. However, that is not his only goal. The Nameless Hero also want to escape the Valley of Mines, anyway that he can.

In the endgame, with the help of a wizard named Xardas, the Nameless Hero banishes a dark god called the Sleeper, to his own dimension. This causes the magic barrier to collapse, releasing all the convicts who escape to the mainland of Khorinis.

The land presented in the game is a medieval fantasy world, full of magic, inhabited by various creatures. During the initial part of the game, you must decide to belong to one of the three camps. Regardless of the choice, sooner or later it hits the main storyline. The main axis of the game is linear, but the development of individual tasks may be different, and the story is full of twists and unexpected events. The Unknown Hero, during his adventure, meets both characters favorable to him (Diego, Milten, Lester and Gorn), neutral and hostile. In the game, you can encounter various monsters, for example, Scavengers, Lurkers, Shadowbeasts or Trolls. The Orcs also live in the colony, waging war with the Myrtans.

There a three camps inside the game world, and the player has to choose which one suits him the most.

The oldest of all camps, located in the castle where the royal guardians, barons, Fire Mages, Water Mages and diggers used to live, which after the creation of the magical barrier was taken over by prisoners led by Gomez. In contrast to the rest, the Old Camp is governed by strict laws. They excavate and trade ore with the outside world. Only the inhabitants of the Old Camp exchange with king Rhobar II, although the New Camp also has its own mine. Of all the three camps, only this one does not plan to destroy the magical barrier, its only purpose is to trade with king Rhobar II and the inhabitants of the Psionic Camp. Thanks to this, it's is the richest of all. King Rhobar II, in return for the magical ore, gives up everything that the Old Camp will demand. The Old Camp is surrounded by a wooden palisade and is divided into an outer ring, in which there are diggers and shadows, and internal (castle in the Valley of Mines), where the Old Camp's guardians, Magicians of Fire and ore barons are staying. The leader of the Old Camp is a baron named Gomez. In the outer ring is also the Scatty's arena, where the representatives of the three camps are fighting, as well as the market square. Other groups of prisoners also have their own leaders. The leader of the Old Camp's guardians of is Thorus, shadows - Diego, and the Fire Mages - Corristo.

The new camp was created as a result of the split in the Old Camp. It strives to destroy the magical barrier and release prisoners by detonating a great mound of magical ore. The raw material needed for this is mined in the Free Mine. Most of the houses, the headquarters of the Magów Woda and the mountain of ore are located in a large cave. The members of the New Camp are mainly deserters and runaways from the Old Camp. There are no rules in the New Camp, and the law is just an abstract concept. However, to protect the great mound of magical ore, the Magi of Water hired mercenaries who protect them and the mound against pests. This is, despite the huge amount of magical ore owned, the poorest camp, which mainly survives from assaults on convoys of the Old Camp, which is a step away from the civil war. Thanks to water dam and appropriate conditions it is possible to grow rice, which is used, among others for the production of rice - alcohol sold in the inn. The leader of the mercenaries in the New Camp is General Lee, thrown into the colony for the murder of the wife of King Rhobar II, whom he did not commit. The leader of the pests is Lares, and the Archmage of the Waters - Saturas.

It is a camp (also called the Swamp Camp or the Sect Camp), whose members have renounced the old gods, worshiping the Sleeper who is to help them regain freedom. Thanks to the vision of Y'Berion, the spiritual leader of the Brotherhood of the Sleeper, they believed that the dreamer is to help the faithful, destroying the magical barrier, and unfaithful punishing. Members of the Brotherhood of the Sleeper promote the burning of swamp herb, growing only here. Each novice of the Brotherhood of the Sleeper gets a daily portion to be able to stay in spiritual contact with the Sleeper. Some gurus have more visions about the Sleeper after more swampy herb. For the remaining prisoners, members of the Brotherhood of the Sleeper are considered to be freaks or madmen, perhaps because of body tattoos, strange costumes, completely shaved heads or just different beliefs. Many prisoners join this camp mainly because of the swamp herb and its special properties. The camp consists of wooden houses standing on the ground and suspended in trees and the temple where Y'Berion lives with Natalia and Chani, who are probably their courtesans. Campers are divided into novices, whose main task is to collect and process swamp herb, gurus who receive visions from the Sleeper and temple guards who look after security, and collect creep secretions - monsters similar to big spiders plaguing diggers in the Old Mine. Eight gurus lead the camp. The highest of them is Y'Berion, whose deputy is Cor Kalom, and the third most important person in the whole Brotherhood of the Sleeper is Cor Angar. The other five gurus are Baal Namib, Baal Cadar, Baal Tyon, Baal Orun and Baal Tondral.

There are many different artefacts in the game, such as rings, necklaces, amulets and more. One of the most important are:

Gothic: The Movie Based on the first game, the German fan band T.M.T. Production created the movie Gothic: Der Film, based on the graphics engine of the game, from which a large part of the dialogues were taken. Some details from the movie do not happen in the game, but the whole story is almost identical. The film lasts about two hours.

There is also an English version of the movie - Gothic: The Movie - which in relation to the German version is shortened by a dozen or so scenes.

Technique of the game[edit | edit source]

The three-dimensional world of the game is presented from the third person perspective. He talks with independent characters to obtain information, kills monsters and performs important tasks for the plot of the game, as well as side missions, not necessary to complete the game. For all these activities, the player receives the experience points needed to learn new skills. The game has been fully localized, including spoken issues, into English language.

The hero's character can be developed by gaining skill points, with ten levels for each level of experience that can be spent on acquiring any skill for the Nameless Hero. Character statistics can only be increased by teachers. The same goes for the science of magic circles. Employees of Pirahna Bytes sought to simplify character statistics, which were limited to four aspects of development - strength, dexterity, mana and health. Skills that can be gained include the use of one-handed, two-handed weapons, bow, crossbow, picking locks, sneaking, acrobatics and hunting skills (skinning animals and like it).

Retrieved from "https://gothic.fandom.com/wiki/Gothic_1?oldid=8134"
Community content is available under CC-BY-SA unless otherwise noted.