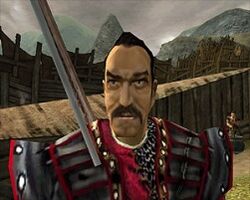 Gothic 3
Locations
Gothic 1: Exchange point, in front of the gate to the castle, troll canyon, southern gate of Old Camp

Information in this article has been compiled with the help of the Gothic Almanach and the Mondgesänge database.

Diego is a skilled thief and one of the best friends of the Nameless Hero. He appears in every part of the Gothic series except for Gothic 3: Forsaken Gods and Gothic 3: The Beginning.

Diego is a clever man who always looks for opportunities to get rich. He has a line of business and is ready for a dirty work if there is money in it to be made, yet remains loyal to his friends. Very smart, can set up well in life and get out of many opposites. Diego likes to be up to date and always know what's going on.

It is unknown where Diego comes from. Judging by his Varantian-sounding name and features common to that part of the world, he might be from Varant.

Diego used to be an Ore thief in the port city of Khorinis, working for Gerbrandt, a local merchant. Because of his connection with Gerbrandt, Diego started learning more and more about the illegal business the man he was working for was taking part. So much that he started posing a threat to Gerbrandt, and thus forcing him to turn Diego over to the militia. Being unable to oppose any resistance, as he was imprisoned, all of Diego's properties, including his house in the upper quarter of the town, are taken by Gerbrandt.

It was in that cell, where Diego would first meet Lester, Gorn, and later Milten. After spending a short while in the cell, he, together with the other three, was thrown in the Colony, to work in the Ore mines of Khorinis.

Being trapped inside the Magic Barrier over the Mine Valley, Diego chose to join the Old Camp.

One day Gorn and Lester opened the brawl at the Scatty's arena in the Old Camp, and Diego and Milten were recognized as Gorn's and Lester's friends, and their reputation in the Old Camp diminished. Together they planned revenge on Baraback who had hurt Gorn and Lester, and was the source of their misfortunes.

Sometime later, Diego and his friends stole goods that were supposed to go to the Old Camp, while Diego hid in a barrel. At night Diego got out of the barrel and stole the magical ore for betting. Milten helped him. By mistake, however, Diego and Milten went into Gomez's bedroom. Fortunatelytheyhe found only his woman there. Diego and Milten took her with them so that she would not report to Gomez about their deeds. During the escape, Diego and Milten found the meditator Drago, who, however, did not notice them. Hae woke up at the last moment, seeing only the woman's dress disappearing around the corner. Diego and Milten locked themselves in the watchtower, but Drago threw an acid spell that hit the sack of magical ore and spurred him into action. The explosion collapsed the watchtower, while Diego and Milten jumped out and grabbed the branches of the tree. Then, Diego hid the magical ore in the cave in which Gorn was curing.

Gothic II and Gothic II: The Night of the Raven

After the fall of the Magic Barrier over the Mine Valley, Diego escaped to the port city of Khorinis, where he intended to warn the Paladins of the Dragons of Khorinis attacking the Valley of Mines. However, he was not admitted to Lord Hagen and by Lothar's order, Diego was sent back to the Valley of Mines. Diego was taken prisoner by the Paladins, who entered the Mine Valley after the fall of the Magic Barrier over the Valley of Mines. It turned out, however, Diego is useful because he knows the area well. He was assigned to the Silvestro's group, who sent him with two Knights away from the camp to find a safe place to hide the accumulated magical ore. However, Silvestro and the Prisoners fell on the Creeper herd and died. Diego stitched in a small hollow in the Orcs Land, where the Nameless Hero found him and led him out of the Valley of Mines. Then he went to Khorinis. In Khorinis, Diego asked the Nameless Hero to regain his savings, which were left on the former Square of Exchange. Diego wanted revenge on Gerbrandt, so he asked the Nameless Hero to bring him a letter. After reading the letter in which Diego threatened him, Gerbrandt escaped, and Diego takes over his house. After killing all the Dragons from Khorinis in the Mine Valley, Diego sailed with the Nameless Hero and friends from Khorinis to the Island of Irdorath and then to Myrthana in "Esmeralda".

Along with the Nameless Hero, Diego sailed from Island of Irdorath to Myrthana. After leaving "Esmeralda", Diego and the Nameless Hero together with Gorn, Milten and Slaves, liberated Ardea together. Then Diego set off from Ardea to Varant to earn. The Nameless Hero met Diego in Braga and they hunted together for Dark Teeth. After completing the task, Diego accompanied the Nameless Hero who took him to Mora Sul, where, as usual, Diego was looking for a way to make easy money. Diego also advised the Nameless Hero to go to Zuben. After the ending of the War between Innos and Beliar, Diego lived in Mora Sul, became the richest man in the Kingdom of Myrthana and created a great trading empire.

Diego, along with Milten, Lester and Gorn, went to Setarrif to stop the Sleeper. Diego helped Milten dig out the entrance to the ruins of the Setarrif ruins and gave the fellow of the Nameless Shepherd of Feshyr some hints.

After the liberation of the Ardea from the Orcs, Diego gave the Nameless Hero his Shadow Armor, and he himself clothed himself in the Hunter's Clothing.

Retrieved from "https://gothic.fandom.com/wiki/Diego?oldid=7264"
Community content is available under CC-BY-SA unless otherwise noted.